The newly released FreeDV 700C mode uses the Coherent PSK (COHPSK) modem which I developed in 2015. This post describes the challenges of building HF modems for DV, and how the COHPSK modem evolved from the FDMDV modem used for FreeDV 1600.

HF channels are tough. You need a lot of SNR to push bits through them. There are several problems to contend with:

When the transmit signal is reflected off the ionosphere, two or more copies arrive at the receiver antenna a few ms apart. These echoes confuse the demodulator, just like a room with bad echo can confuse a listener.

Here is a plot of a BPSK baseband signal (top). Lets say we receive two copies of this signal, from two paths. The first is identical to what we sent (top), but the second is delayed a few samples and half the amplitude (middle). When you add them together at the receiver input (bottom), it’s a mess: 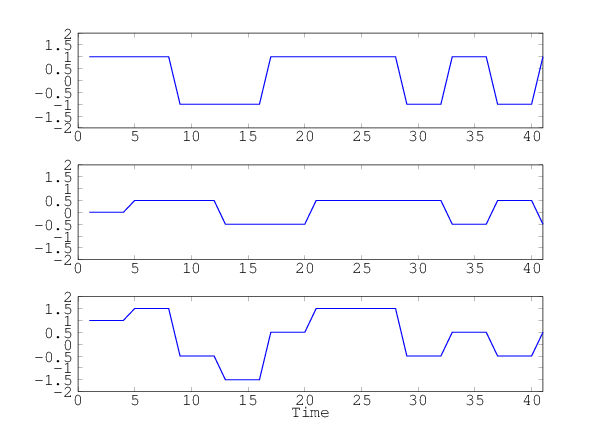 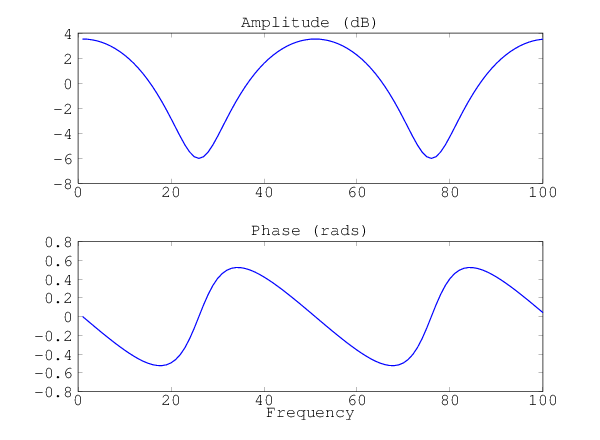 Note that comb filtering also means the phase of the channel is all over the place. As we are using Phase Shift Keying (PSK) to carry our precious bits, strange phase shifts are more bad news.

All of these impairments are time varying, so the echoes/notches, and phase shifts drift as the ionosphere wiggles about. As well as the multipath, it must deal with noise and operate at SNRs of around 0dB, and frequency offsets between the transmitter and receiver of say +/- 100 Hz.

If commodity sound cards are used for the ADC and DAC, the modem must also handle large sample clock offsets of +/-1000 ppm. For example the transmitter DAC sample clock might be 7996 Hz and the receiver ADC 8004 Hz, instead of the nominal 8000 Hz.

As the application is Push to Talk (PTT) Digital Voice, the modem must sync up quickly, in the order of 100ms, even with all the challenges above thrown at it. Processing delay should be around 100ms too. We can’t wait seconds for it to train like a data modem, or put up with several seconds of delay in the receive speech due to processing. 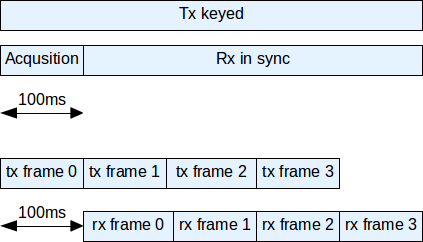 Using standard SSB radio sets we are limited to around 2000 Hz of RF bandwidth. This bandwidth puts a limit on the bit rate we can get through the channel. The amplitude and phase distortion caused by typical SSB radio crystal filters is another challenge.

Designing a modem for HF Digital Voice is not easy!

In 2012, the FDMDV modem was developed as our first attempt at a modem for HF digital voice. This is more or less a direct copy of the FDMDV waveform which was developed by Francesco Lanza, HB9TLK and Peter Martinez G3PLX. The modem software was written in GNU Octave and C, carefully tested and tuned, and most importantly – is open source software.

This modem uses many parallel carriers or tones. We are using Differential QPSK, so every symbol contains 2 bits encoded as one of 4 phases.

Lets say we want to send 1600 bits/s over the channel. We could do this with a single QPSK carrier at Rs = 800 symbols a second. Eight hundred symbols/s times two bit/symbol for QPSK is 1600 bit/s. The symbol period Ts = 1/Rs = 1/800 = 1.25ms. Alternatively, we could use 16 carriers running at 50 symbols/s (symbol period Ts = 20ms). If the multipath channel has echoes 1ms apart it will make a big mess of the single carrier system but the parallel tone system will do much better, as 1ms of delay spread won’t upset a 20ms symbol much: 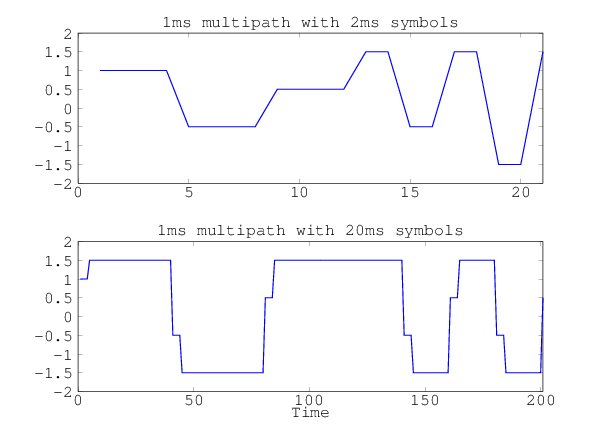 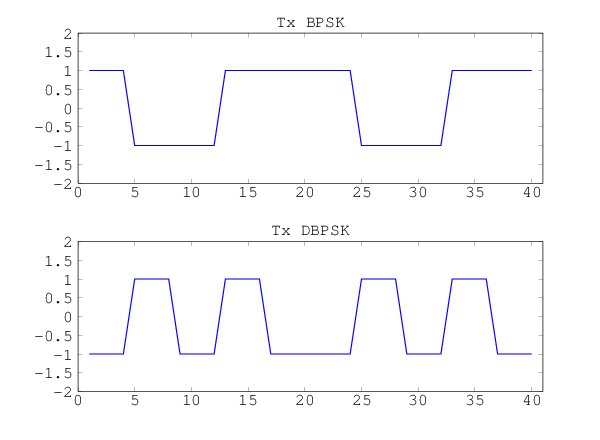 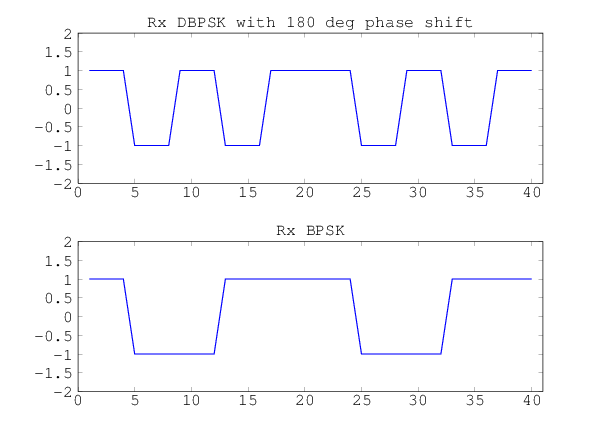 This is a trivial example, in practice the phase shift of the channel will vary slowly over time, and won’t be a nice neat number like 180 degrees.

DPSK is a neat trick, but has an impact on the modem Bit Error Rate (BER) – if you get one symbol wrong, the next one tends to be corrupted as well. It’s a two for one deal on bit errors, which means crappier performance for a given SNR than regular (coherent) PSK.

To combat frequency selective fading we use a little Forward Error Correction (FEC) on the FreeDV 1600 waveform. So if one carrier gets notched out, we can use bits in the other carriers to recover the missing bits. Unfortunately we don’t have the bandwidth available to protect all bits, and the PTT delay requirement means we have to use a short FEC code. Short FEC codes don’t work as well as long ones.

Over the next few years I spent some time thinking about different modem designs and trying a bunch of different ideas, most of which failed. Research and disappointment. You just have to learn from your mistakes, talk to smart people, and keep trying. Then, towards the end of 2014, a few ideas started to come together, and the COHPSK modem was running in real time in mid 2015.

The major innovations of the COHPSK modem are: 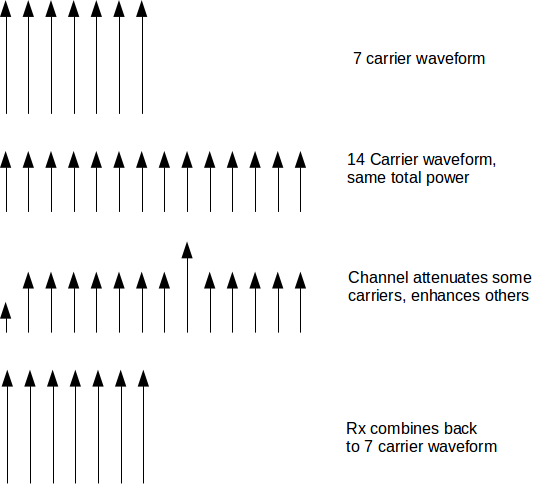 Here is a figure that shows how the pilot and data symbols are distributed across one frame of the COHPSK modem. More information of the frame design is available in the cohpsk frame design spreadsheet, including performance calculations which I’ll explain in the next blog post in this series. 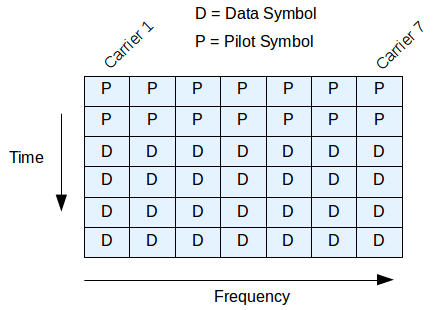 In the next post I’ll show how reading a few graphs and adding a few dBs together can help us estimate the performance of the FDMDV and COHPSK modems on HF channels.

cohpsk_plots.m Octave script used to generate plots for this post.

Some earlier musings on FreeDV 1600 and why SSB works so well:

One thought on “Modems for HF Digital Voice Part 1”