Over the last few days I have prototyped a few more building blocks for the SM2000, documented here for my reference.

These are described in quite a few places, one of the best references is the PIN Diode Handbook. Key issue for me is the receive side loss through the switch, as it adds to my noise figure, which I have put a lot of work into keeping low! 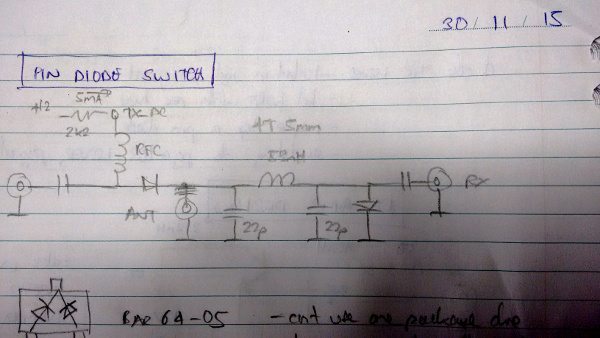 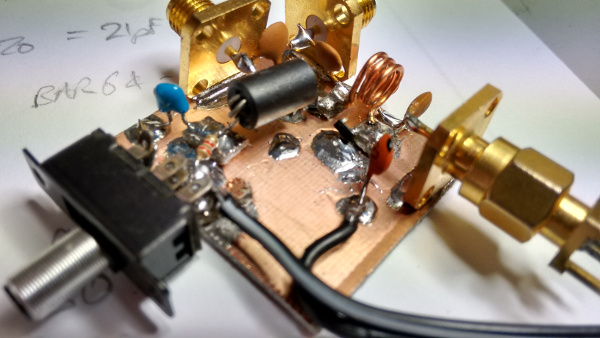 Note the switch so I can make sure the control voltage is tied to 0V in the “off position”.

The initial rx loss was a bit high at 0.5dB which I traced to the inductor value being measured as 72nH rather than the 53nH I designed for. Need to watch that with home made inductors. Reducing it to 3 turns made it bang on, and the receive loss of the TR switch is now 0.25dB, about what I expected. The transmit insertion loss is also a little high at 1dB, perhaps more drive current is required in the PIN diodes. The isolation between the tx and rx ports on transmit is just 23dB, I was hoping for more. However with 1W (30dBm) out, thats 7dBm presented to the rx LNA input which is OK.

Thanks Matt VK5ZM for discussions on the TR switch over IRC as I messed with it.

There comes a time in every RF noob’s life where you need to measure the L and Q (or effective series or parallel inductor resistances). I started with Measuring Inductors at VHF and Above which suggests a series resonant circuit in series with a tracking generator and spectrum analyser.

This works well when the Rl of the inductors is comparable to the spectrum analyser 50 ohm impedance. However at VHF, inductors in the couple of hundred nH range are common. An air core inductor with L = 150nH may have a Q of 200 at 150MHz, giving an equivalent Rl = 2*pi*f*L/Q = 2*pi*150E6/200 = 0.7 ohms. When Rl is a fraction of an ohm, the spec-an input Z=50 ohms dominates the Q of the series tuned circuit and you don’t get much of a peak.

So I tried a few different topologies, and ended up hanging a series resonant LC circuit across the spectrum analyser input, and running some numbers as below. This gives you a nice sharp dip at resonance, so knowing C, you can work out L=1/((2*pi*f)^2)C. Then some voltage division based on the depth of the “dip” lets you work out Rl and hence Q: 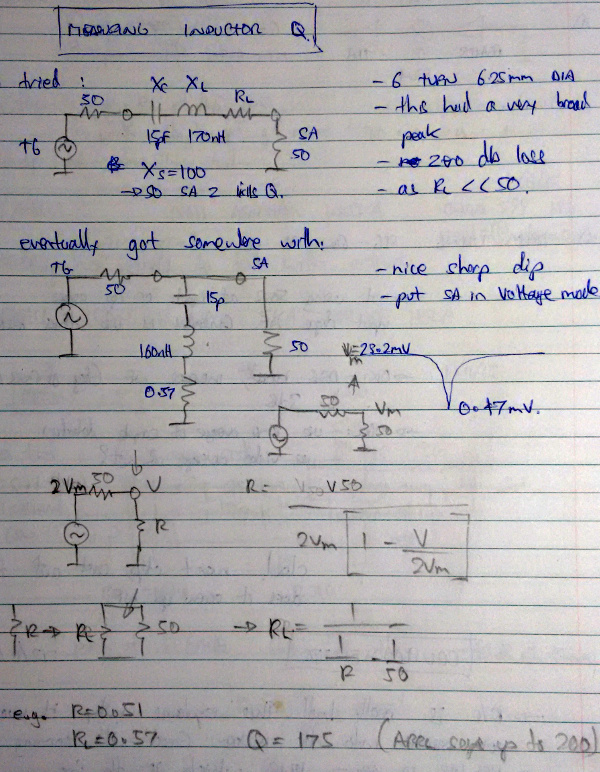 While writing this post I stumbled across this blog post on Measuring Resonator Q at VHF, which uses a cool gimmick-capacitor variation on a method described in EMRFD.

Thanks also to Neil VK5KA and Matt VK5ZM for discussions on this topic.

I need a 1W PA for the SM2000. I have no PA experience so needed a way to get started. The largest VHF-capable transistor I have laying about is the BFQ19, which is rated at 1W. EMRFD suggests choosing a device whose power dissipation exceeds the desired output power, so I chose a 0.5W target output power. This transistor has a maximum collector voltage of 15V. Class C amplifiers can kick Vc to 2 or 3 times Vcc so I chose a Vcc of 5V.

“RF Circuit Design” tells me that small signal S-params don’t count for power amplifier design, and there are no large signal design parameters for this transistor (it’s designed for small signal operation). So I used the simple approach of just designing for a collector load of Rl = Vcc*Vcc/2P = 25 ohms, ignored any reactive components, and crossed my fingers.

I tried a couple of different impedances driving the base. With the conventional selection of 10 ohms I had poor gain and couldn’t reach my target output power. I think the problem was the voltage driving the base. 13dBm into 10 ohms is sqrt(2)*sqrt(0.02*10) = 0.632Vpeak, which is less than the 0.7V needed to switch on the transistor. By changing the impedance match network to 100 ohms driving the base I kicked up the base drive (albiet at a higher impedance). Now the transistor was being switched on, and I reached my power target with 13dBm of drive and a Vcc of 7.6V.

This is probably an artifact of the low power output and hence low drive of my little power amplifier. For a 1W amplifier with 100mW drive, peak base voltage would be sqrt(2)*sqrt(0.1*10) = 1.4Vpeak. 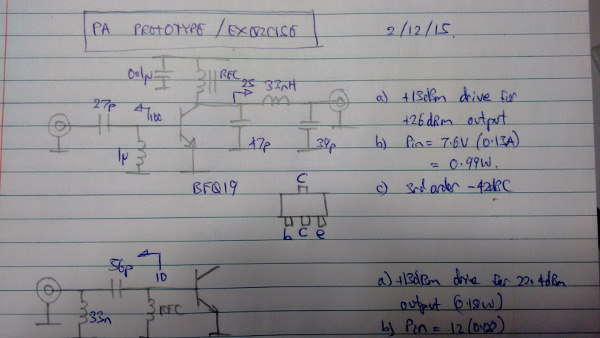 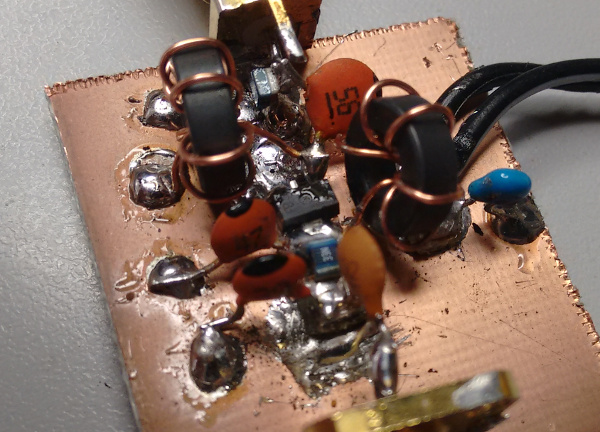 Note the 1uH inductor value in the sch photo should be 100nH. I only ran the PA for a few seconds, as I don’t have a heatsink and it’s dissipating 0.5W. A bigger piece of PCB soldered to the collector might be OK, although that might add capacitance too. At some point I’ll need to work out how to calculate the heatsink size I need.

I spent a bit of time playing with different base and collector loads in order to increase the gain. However looking at various other VHF PA designs, it appears 10dB power gain is about right, so I decided my little amplifier is working OK. I’ve learned a lot! Next step is to come up with some sort of tx power and gain budget so I make sure I have the correct drive levels for a 1W PA.

The design calculations for this VHF PA are in . I’ve started collecting a bunch of little Octave functions for RF design into rfdesign.m.