The goal of this project is to develop a “100 kbit/s IP link” for VHF/UHF using just a Pi and RTLSDR hardware, and open source modem software. Since the first post in this series there’s been quite a bit of progress:

Bill and I have built and tested (on a spec-an) Tx filters for our Pis, that ensure the transmitted signal meets Australian Ham spurious requirements (which are aligned with international ITU requirements). I also checked the phase noise at 1MHz offset and measured -90dBm/Hz, similar to figures I have located online for my FT-817 at a 5W output level (e.g. DF9IC website quotes +37dBm-130dBc=-93dBm/Hz).

While there are no regulations for Ham phase noise in Australia, my Tx does appear to be compliant with ETSI EN 300 220-1 which deals with short range ISM band devices (maximum of -36dBm in a 100kHz bandwidth at 1MHz offset). Over an ideal 10km link, a -90dBm/Hz signal would be attenuated down to -180dBm/Hz, beneath the thermal noise floor of -174dBm/Hz.

I set up an experiment to pulse the Pi Tx signal off and on at 1 second intervals. Listening on a SSB Rx at +/-50kHz and +/-1MHz about 50m away and in a direct line of site to the roof mounted Pi Tx antenna I can hear no evidence of interference from phase noise.

I am satisfied my Pi based Tx won’t be interfering with anyone.

However as Mark VK5QI suggested I would not recommend amplifying the Tx level to the several watt level. If greater powers are required there are some other Tx options. For example the FSK transmitters of chipset transmitters work quite well, and some have better phase noise specs.

Over the Air Tests

Bill and I spent a few afternoons attempting to send packet at various bit rates. We measured our path loss at -135dBm over a 10km, non-line of site suburban path. Using our FT817s, this path is a noisy copy on SSB using a few watts.

Here is a plot of Eb/No versus BER generated by the mfsk.m script: 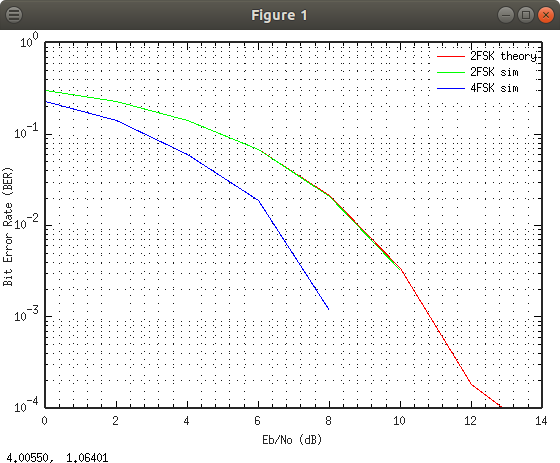 I was disappointed with the real world OTA results: I received packets at 1000 bit/s with 8% BER (equivalent to an Eb/No of 5.5dB) which suggests we are losing 8.5dB somewhere. Our receiver seems a bit deaf.

Here’s a screenshot of the “dashboard” with a 4FSK signal sent by Bill (we experimented with 4FSK as well as 2FSK): 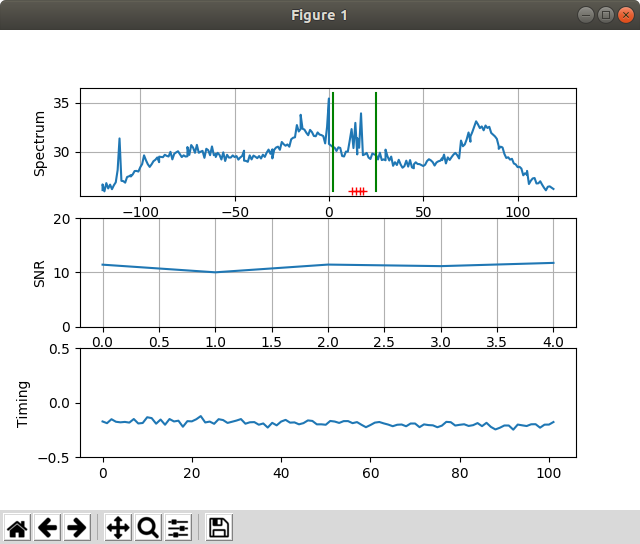 You can see a bunch of other signals (perhaps local EMI) towering over our little 4FSK signal. The red crosses show the frequency estimates of the demodulator – they should lock onto each of the FSK tones (4 in this case).

One risk with low cost SDRs (in a city) is strong signal interference causing the receiver to block and fall over entirely. When I connected my RTL-SDR to my antenna, I had to back the gain off about 3dB, not too bad. However Bill needed to back his gain off 20dB. So that’s one real-world factor we need to deal with.

Still we did it – sending packets 10km across town, through 135dB worth of trees and buildings with just a 12mW Pi and a RTLSDR! That’s a start, and no one said this would be easy! Time to dig in and find some missing dBs.

Over the Bench Testing

I decided to drill down into the MDS performance and system noise figure. After half a days wrangling with command line utilties I had a HackRF rigged up to play FSK signals. The HackRF has the benefit of a built in attenuator, so the output level can be quite low (-68dBm). This makes it much easier to reliably set levels in combination with an external switched attenuator, compared to using relatively high (+14dBm) output of the Pi which gets into everything and requires lots of shielding. Low levels out of your Tx greatly simplifies “over the bench” testing. 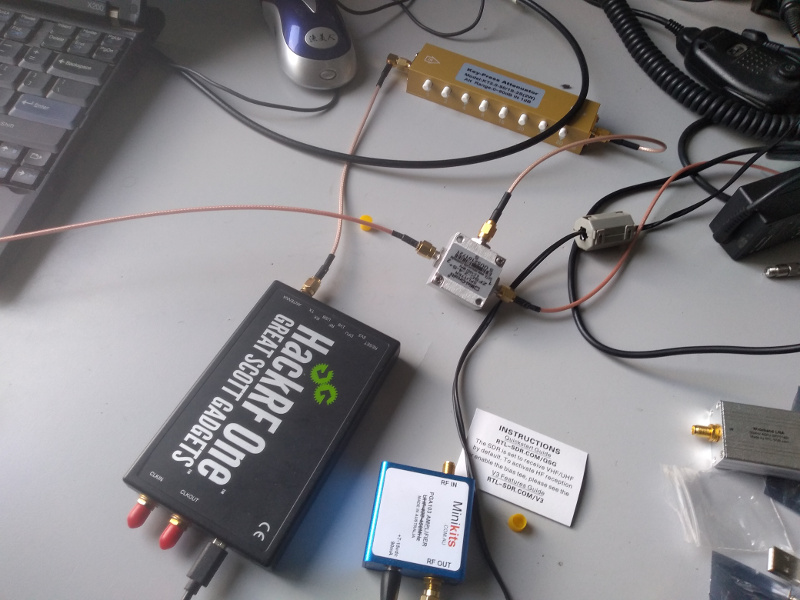 After a few days of RF and DSP fiddling I tracked down a problem with the sample rate. I was running the RTL-SDR at a sample rate of 240 kHz, using it’s internal hardware to handle the sample rate conversion. Sampling at 1.8MHz, and reducing the sample rate externally improved the performance by 3dB. I’m guessing this is due to the internal fixed point precision of the RTL-SDR, it may have significant quantisation noise with weak signals.

OK, so now I was getting system noise figures between 7.5 and 9dB when tested “over the bench”. Close, but a few dB above what I would expect. I eventually traced that to a very subtle measurement bug. In the photo you can see a splitter at the output of the switched attenuator. One side feeds to the RTL-SDR, the other to my spec-an. To calibrate the system I play a single freq carrier from the HackRF, as this makes measurement easier on the spec-an using power averaging.

Turns out, the RTL-SDR input port is only terminated when RTL-SDR software is running, i.e. the dongle is active. I often had the software off when measuring levels, so the levels were high by about 1dB, as one port of the splitter was un-terminated!

These results are consistent with those reported in this fine report, which measured the NF of the SDRs directly. I have also previously measured RTLSDR noise figures at around 7dB, although on an earlier model.

For fun I hooked up a LNA and using 4FSK I managed 2% BER at -136dBm, which works out to a 2.5dB system noise figure. This is a little higher than I would expect, however I could see some evidence of EMI on the dashboard. Such low levels are difficult on the bench without a Faraday cage of some sort.

With this project the physical layer (modem and radio) is wide open for us to explore. With chipset based approaches you get a link or your don’t, and perhaps a little diagnostic information like a received signal strength. Then again they “just work” most of the time so that’s probably OK! I like looking inside the black boxes and pushing up against the laws of physics, rather that the laws of business.

It gets interesting when you can measure the path loss. You have a variety of options to improve your bit error rate or increase your bit rate:

There are some other cool projects in the “200kHz channel/several 100 kbit/s/IP” UHF Ham data space:

I’m a noob when it comes to protocols, so have a lot to learn from these projects. However I am pretty focussed on modem/FEC performance which is often sub-optimal (or delegated to a chipset) in the Ham Radio space. There are many dB to be gained from good modem design, which I prefer over adding a PA.

OK, so we have worked though a few bugs and can now get results consistent with the estimated NF of the receiver. It doesn’t explain the entire 8.5dB loss we experienced over the air, but it’s a step in the right direction. The bugs tend to reveal themselves one at a time ……

One possible reason for reduced sensitivity is EMI or ambient RF noise. There are some signs of this in the dashboard plot above. This is more subtle than strong signal overload, but could be increasing the effective noise figure on our link. All our calculations above assume no additional noise being fed into the antenna.

I feel it’s time for another go at Over The Air (OTA) tests. My goal is to get a solid 1000 bit/s link in both directions over our path, and understand any impact on performance such as strong signals or a raised noise floor. We can then proceed to the next steps in the project plan.

GitHub repo for this project with build scripts, a project plan and command lines on how to run some basic tests.
Open IP over VHF/UHF – first post in this series
Bill and I are documenting our OTA tests in this Pull Request
4FSK on 25 Microwatts low bit rate packets with sophisticated FEC at very low power levels. We’ll use the same FEC on this project.
Measuring SDR Noise Figure
Measuring SDR Noise Figure in Real Time
Evaluation of SDR Boards V1.0 – A fantastic report on the performance of several SDRs
NPR70 – New Packet Radio Web Site
HNAP Web site