The goal of this project is to develop a “100 kbit/s IP link” for VHF/UHF using just a Pi and RTLSDR hardware, and open source signal processing software [1]. Since the last post, I’ve integrated a bunch of components and now have a half duplex radio data system running over the bench.

Here is a block diagram of the Pi based terminal, showing hardware and software components:

When I build my next terminal, I will try separate Tx and Rx antennas, as a “minimalist” alternative to the TR switch. The next figure shows the transmit control signals in action. Either side of a burst we need to switch the TR switch and turn the Tx carrier on and off:

Here’s the current half duplex setup on the bench: 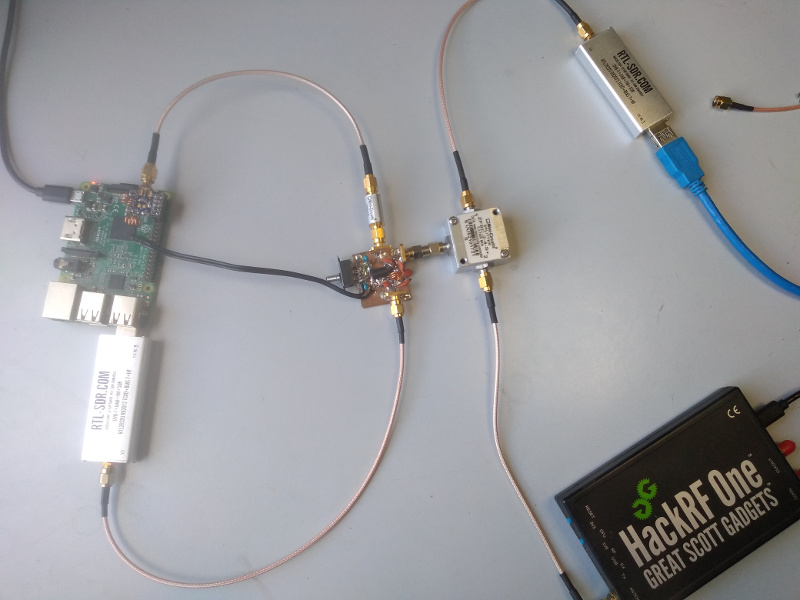 Terminal2 is on the left, is comprised of the Pi, RTLSDR, and TR switch. Terminal1 (right) is the HackRF/RTLSDR connected to my laptop. Instead of a TR switch I’m using a hybrid combiner (a 3dB loss, but not an issue for these tests). This also shows how different SDR Tx/Rx hardware can be used with this system.

I’m using 10,000 bit/s for the current work, although that’s software configurable. When I start testing over the air I’ll include options for a range of bit rates, eventually shooting for 100 kbits/s.

Here’s a demo video of the system:

The command lines to run everything are getting unwieldy so I’ll encapsulate them is some “service” scripts to start and stop the system neatly. Then box everything up, try a local RF link, and check for stability over a few days. Once I’m happy I will deploy a terminal and start working through the real world issues. The key to getting complex systems going is taking tiny steps. Test and debug carefully at each step.

It’s coming together quite nicely, and I’m enjoying a few hours of work on the project every weekend. It’s very satisfying to build the layers up one by one, and a pleasant surprise when the pieces start playing nicely together and packets move magically across the system. I’m getting to play with RF, radios, modems, packets, and even building up small parts of a protocol. Good fun!

[1] Open IP over UHF/VHF Part 1 and Part 2.
[2] FSK LDPC Data Mode – open source data mode using a FSK modem and powerful LDPC codes.
[3] SM2000 Part 3 – PIN TR Switch and VHF PA
[4] GitHub repo for this project with build scripts, a project plan and a bunch of command lines I use to run various tests. The latest work in progress will be an open pull request.