I’m interested in developing a VHF mode for FreeDV. One intriguing possibility is to connect a modem to legacy analog FM radios, which would allow them to be re-purposed for digital voice. One candidate is FSK at 1200 bit/s, which is often used over FM for APRS. This operates through FM radios using the mic/speaker ports on $50 HTs, no special data ports required.

So I want to know the performance of FSK over FM in terms of Bit Error Rate (BER) for a given SNR. That got me thinking. When you send FSK through a SSB radio, it faithfully mixes the tones up to RF and you get FSK over the channel. The SSB radio just adds a frequency translation step. So we can model FSK like this:

However sending a FSK modem signal through a FM radio is very different:

FSK over FM is not FSK when you look at the over the air waveform. The spectrum is no longer two tones bouncing back and forth. So what is it?

I wrote a simulation called fsk.m to find out. This involved building up a FSK modem, and an analog FM radio simulation. The modem took me only a few hours but I was struggling with the analog FM simulation for a week! In particular making my FM demodulator get the same results as the theory. FM is a bit old school for me, so I had to hit the ARRL handbook and do a bit of research.

It’s a BEL202 simulation (as used for the APRS physical layer); 1200/2200 Hz tones, 1200 bit/s. I’m using the integrate and dump demodulation method and it matches the theoretical curves for non-coherent BFSK. Here is the FSK modem in action. First the FSK time domain signal and spectrum. The spectrum is a bunch of energy between 1200 and 2200 Hz. Makes sense as the modulator keeps moving back and forth between those two frequencies. 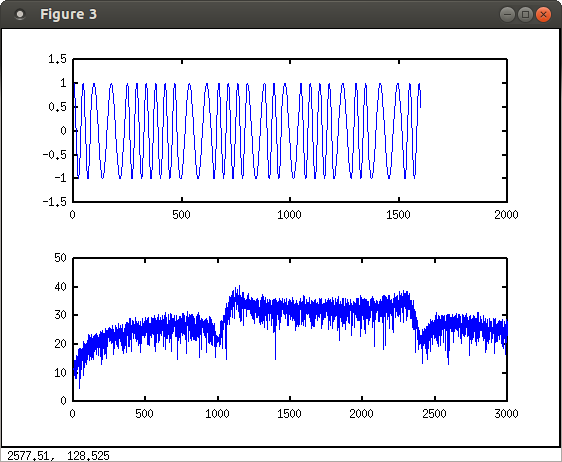 The next figure shows the same signals with a 10dB SNR. Although the time domain signal looks bad, it actually has a Bit Error Rate (BER) of one error in every 1000 bits (BER = 0.001 = 1E-3). The reason it looks so bad is that in the time domain we are seeing the noise from the entire bandwidth (our sample rate is Fs=96kHz). The demod effectively filters most of that out. 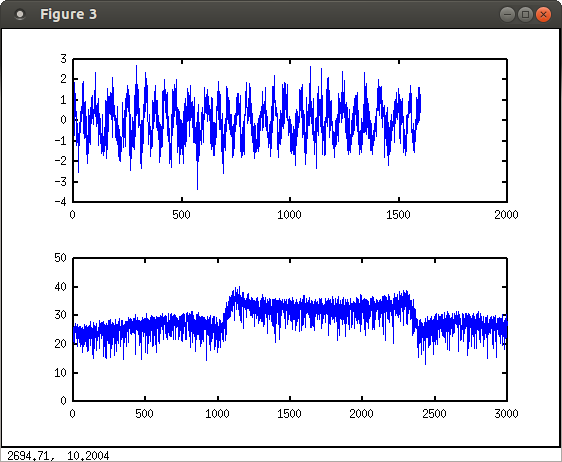 This next plot shows the output from the 1200 and 2200Hz integrators in the FSK demodulator for the 10dB SNR case. The height measures the energy of the tone during that bit period. As we would expect, they are mirror images. When one detects a large amount of energy, the other detects a small amount of the other tone. 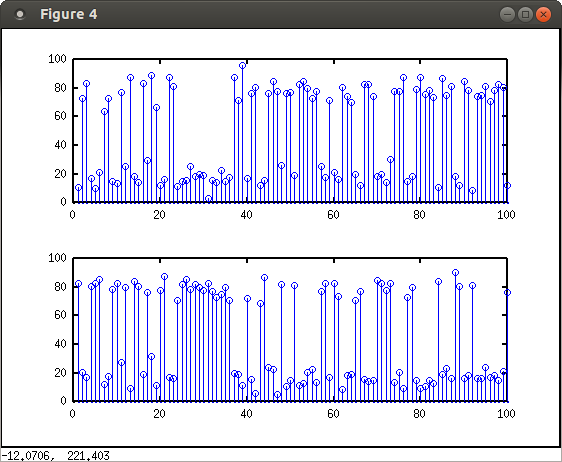 The next step was to build a simulation of the modulator and demodulator in an analog FM radio. I wrote some code to test the input Carrier to Noise Ratio (CNR) versus output SNR. The test signal was a 1000 Hz tone, and the modulator had a maximum deviation of 5kHz, and a maximum input audio frequency of 3 kHz. After the demodulator I notched out the 1000 Hz tone so I could measure the noise power, the input to the notch filter was signal plus noise.

Here is the spectrum at the FM demodulator input for a 1000 Hz test tone: 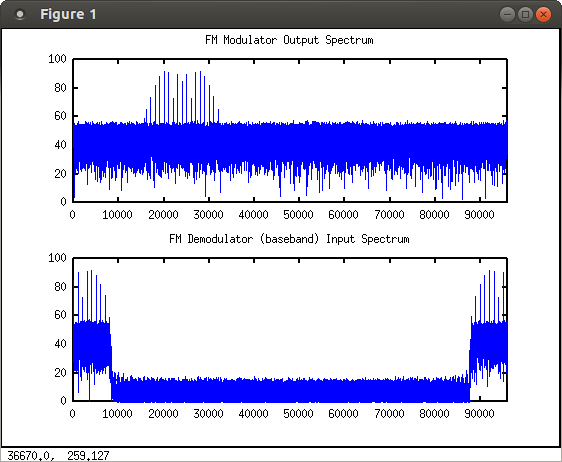 The top plot is the tx signal centred on a 24 kHz carrier, in the bottom plot it has been mixed down to baseband and filtered. The FM signal is 16 kHz wide, as per Carsons rule. Here is the output of the FM demodulator: 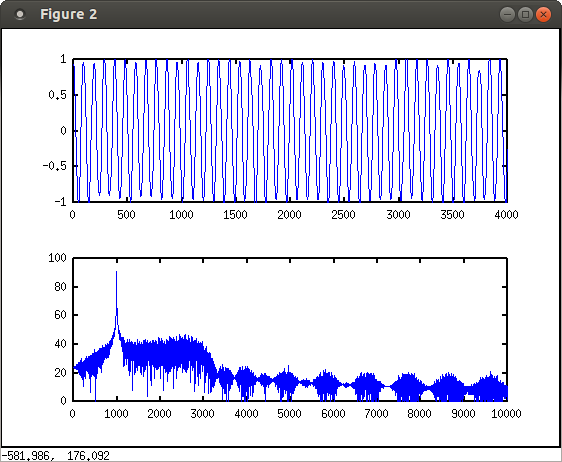 At the top is a nice sine wave, and the bottom also shows the sine wave. You can see the effect of the output 3kHz low pass filter used to limit the noise bandwidth of the demod output.

When tested over a range of CNR inputs, I achieved output SNRs (red) in line with the text books (green): 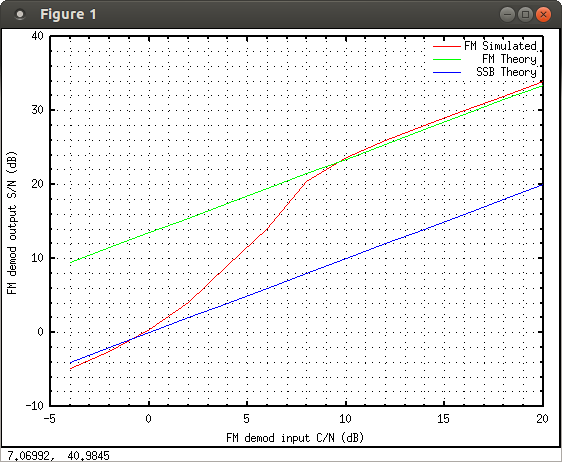 At about 9dB the demodulator falls away from theory as the FM demodulator falls over, this is pretty typical. The theoretical model I have used is only valid above this 9dB threshold. You often hear this threshold effect in FM. The blue line is SSB for comparison. Over a certain threshold FM does quite a bit better in terms of output SNR for the same input CNR.

OK so lets combine the simulations and look at the BER performance: 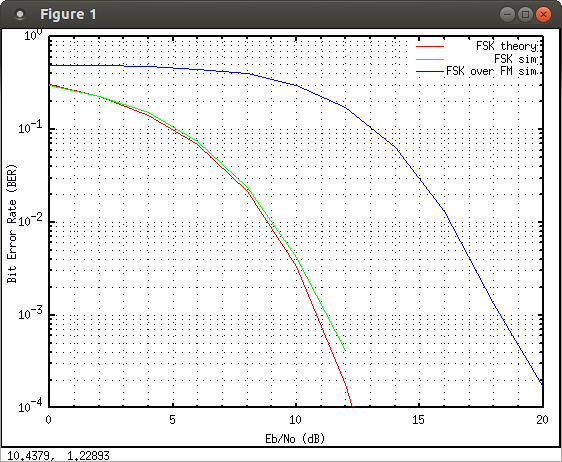 Oh dear. If my simulations are accurate, it appears FSK over FM is a lemon. About 7dB worse than regular FSK for the same BER. So using a FSK modem over a SSB radio would allow you to use 7dB less power than running the same modem through a FM radio. Coherent PSK is 3dB better again that FSK so that would get you a 10dB improvement. Simple FSK or PSK transmitters are easy to build too, and needing 7-10dB less output power would simplify them again (e.g. 100mW versus 1W).

Here is the spectrum at the FM demodulator input when sending FSK: 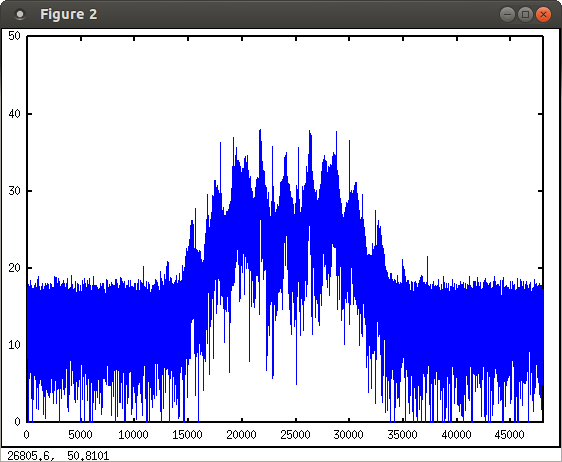 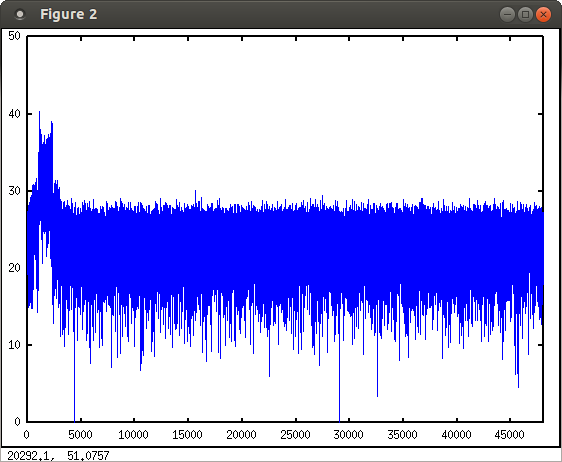 So What went Wrong?

Given the plot of analog FM performance (say compared to SSB) above I had expected better results from FSK over FM.

I think I know where the problem lies. The input CNR is a measure of carrier power to noise power in the input bandwidth of the demodulator. Another way of looking at the VHF channel noise is a “floor”, which can be modelled as the average noise power per 1 Hz of bandwidth, called No.

So the Universe has given us a fixed “noise floor”, which will be the same for any modem. The FM demod input bandwidth is much wider, so it’s sucking up much more noise from the channel, which the poor demodulator has to deal with.

Lets plot the analog FM demod performance again, this time against C/No rather than C/N: 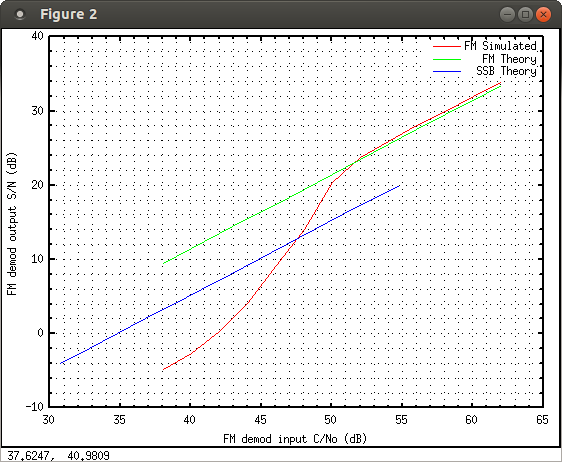 This takes into account the noise bandwidth, everything is “normalised” to the noise floor. When the C/No is beneath 48dB SSB looks much better. We can see a 7dB improvement over FM at low C/No values. This also explains why the microwave guys prefer SSB for their long shots.

Here is the BER curve scaled for C/No: 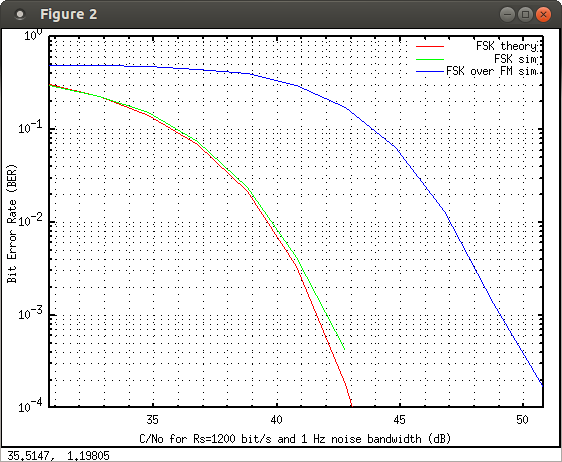 It appears the key to good modem performance is the RF bandwidth of the signal. Given a constant noise floor No, the signal bandwidth sets the total noise power N=NoB the demodulator has to deal with.

This has put me off the idea of a FreeDV VHF mode based on BEL202 FSK through legacy FM radios. I’d really like to come up with a mode that has sparkling BER versus SNR performance. I haven’t spent years making Codec 2 operate at low bit rates just to throw those gains away in the modem!