Codec 2 is an open source speech codec designed for communications quality speech between 700 and 3200 bit/s. The main application is low bandwidth HF/VHF digital radio. It fills a gap in open source voice codecs beneath 5000 bit/s and is released under the GNU Lesser General Public License (LGPL).

Informal listening tests indicate that Codec 2 at 700 bits/s has better speech quality than MELP and is comparable to TWELP at 600 bit/s.

The motivations behind the Codec 2 project are summarised in this blog post.

Here are some samples:

Here is Codec 2 operating at 2400 bit/s compared to some other low bit rate codecs:

Here are some samples with acoustic background noise, similar to what would be experienced when driving a truck. As you can see (well, hear) background noise is a tough test for low bit rate vocoders. They achieve high compression rates by being highly optimised for human speech, at the expense of performance with non-speech signals like background noise and music. Note that Codec 2 has just one voicing bit, unlike mixed excitation algorithms like AMBE and MELP. The MELPe sample has the noise supression option enabled.

What follows is basic introduction to the core Codec 2 algorithms using maths in ‘C code’ to make it more familiar.

Codec2 uses “harmonic sinusoidal speech coding”. Sinusoidal coding was developed at the MIT Lincoln labs in the mid 1980’s, starting with some gentlemen called R.J. McAulay and T.F. Quatieri. I worked on these codec algorithms for my PhD during the 1990’s. Sinusoidal coding is a close relative of the xMBE codec family and they often use mixed voicing models similar to those used in MELP.

Speech is modelled as a sum of sinusoids:

The sinusoids are multiples of the fundamental frequency Wo (omega-naught), hence the name “harmonic sinusoidal coding”. For each frame, we analyse the speech signal and extract a set of parameters:

Where Wo is the fundamental frequency (also know as the pitch), { A } is a set of L amplitudes and { phi } is a set of L phases. L is chosen to be equal to the number of harmonics that can fit in a 4 kHz bandwidth:

Wo is specified in radians normalised to 4 kHz, such that pi radians = 4 kHz. The fundamental frequency in Hz is:

The speech quality of the basic harmonic sinusoidal model is pretty good, close to transparent. It is also relatively robust to Wo estimation errors. Unvoiced speech (e.g. consonants) are well modelled by a bunch of harmonics with random phases. Speech corrupted with background noise also sounds OK, the background noise doesn’t introduce any grossly unpleasant artifacts.

As the parameters are quantised to a low bit rate and sent over the channel, the speech quality drops. The challenge is to achieve a reasonable trade off between speech quality and bit rate.

Here are some block diagrams that illustrate the major sgnal processing elements for a fully quantised configuration of Codec 2. This example includes the LPC correction bit which was a feature of the 2550 bit/s version. 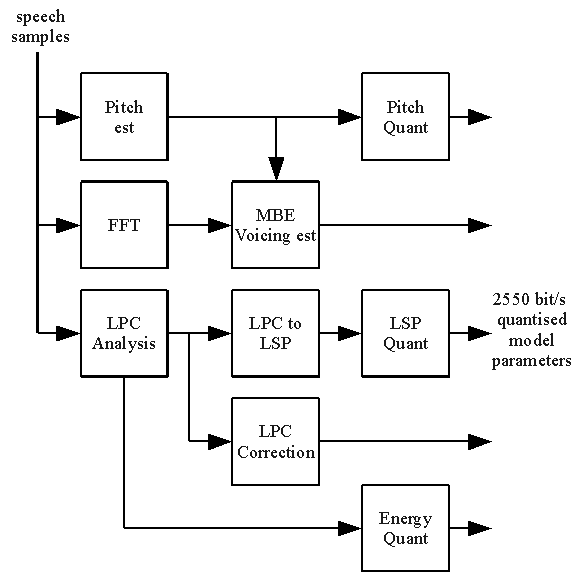 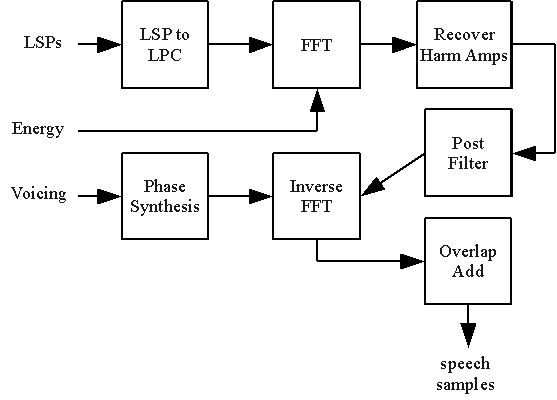 These figures were explained in a presentation I gave at the DCC 2011 conference, for more information see the video of that talk.

The tough bits of this project are:

2. Reduction of a time-varying number of parameters (L changes with Wo each frame) to a fixed number of parameters required for a fixed bit rate. The trick here is that { A } tend to vary slowly with frequency, so we can “fit” a curve to the set of { A } and send parameters that describe that curve.

3. Discarding the phases { phi }. In most low bit rate codecs phases are discarded, and synthesised at the decoder using a rule-based approach. This also implies the need for a “voicing” model as voiced speech (vowels) tends to have a different phase structure to unvoiced (constants). The voicing model needs to be accurate (not introduce distortion), and relatively low bit rate.

Is it Patent Free?

I think so – much of the work is based on old papers from the 60, 70s and 80’s and the PhD thesis work used as a baseline for this codec was original. A nice little mini project would be to audit the patents used by proprietary 2400 bit/s codecs (MELP and xMBE) and compare.

However there are many ways to make a codec sound good, so we simply need to choose and develop other methods.

Is Codec2 compatible with xMBE or MELP?

Nope – I don’t think it’s possible to build a compatible codec without infringing on patents or access to commercial in confidence information. We are pushing new boundaries where closed source can’t follow, such as innovative integration between codecs and modems.